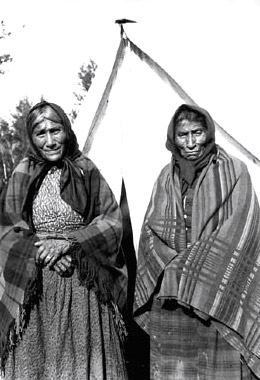 Treaty paid here today. I vaccinated quite a number of children and prescribed for the sick. Among my applicants for vaccination were two women who came together with the request that they also might be vaccinated. I have vaccinated hundreds of people but certainly these two women were the most remarkable that ever came for Jenner's great preventative for small pox. The oldest was 107 years old and remember well and used to play in the H.B. Co. fort built by Sir Alexander MacKenzie in 1795 about 12 miles above the Peace River Landing; the youthful maiden that accompanied her was 85 years of age and had been the wife of a man named James Hopp who acted as steersman for Dr. Rae, a H.B. Co. official who made an expedition down the MacKenzie River in 1850 in search of Sir John Franklin. I told these interesting old women that I thought they might risk their chance of taking small pox, but though I would not vaccinate them I should be very happy to photograph them and which I did. 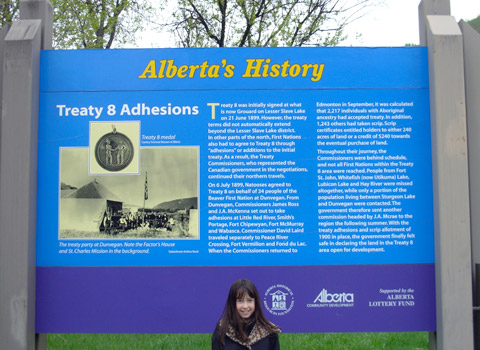 This evening the treaty business of this being being over we embarked on a raft for Vermilion, a place 300 miles further down the Peace. A commodious raft is a splendid way of travel on a fast flowing river like the Peace, and as the water is rising quickly our progress will be accelerated. A pilot is necessary. At the Landing the river is 660 yards wide and increases in width as one descends. It is full of magnificent islands but the pilot is necessary to insure the proper channel. At the heads of many of the islands huge collections of drift wood piled high up when the water is at its highest are to be observed. We had not gone more than 5 miles down the river when two of these dangerous drift piles had to be avoided by rowing. The pilot told me 2 Indian children were buried on one of the islands. Some years ago an Indian was taking his family down the river and for some unaccountable reason made 2 rafts placing the 2 children on one raft while he and the mother went on a second. The swift current bore the raft having the children on board directly into the drift pile and they were drowned.

We have magnificent high banks 600 or 800 feet high on either side and well wooded. The river is tortuous and the evening sun, striking upon these vast verdant hills, presents an ever changing panorama to the eye. This evening the flies were not bad and we could enjoy it to the full.
Judy Bowcott & Ken Herlinveaux
Peace River Alberta Canada
Call: 780.332.1086
CONTENT COPYRIGHT: All Rights Reserved ©
All historical photographic images & other images on this site are the property of Wineglass Ranch.
All artwork images are the sole property of Jessica Herlinveaux.