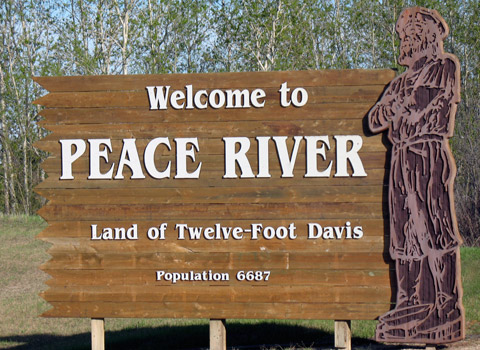 Last evening a boat with 4 men in charge arrived up the river from Vermilion. In this boat was outside of the H.B. Co. the oldest trader the Peace River has known. His name is H.F. Davis, or  '12 foot Davis' to give him the name that he received in the British Columbia mining camp. Born in Ohio in 1815 and in early life a baker by trade, he was one of the many who was drawn to California in the gold rush and he can be numbered amount the forty miners, that is one who made acquaintance with the Pacific slope in 1849. There he had various vicissitudes as many miners have. He was an expert boatman and for years was employed on the Fraser River by the H.B. Co.in that capacity. He trapped and mined on the headwaters of the Peace and finally over 30 years ago made his appearance at Dunvegan and opened up a trading post in company with Jim Crest, at present of Edmonton but who also was a California miner and other partners.

The appearance of a 'free trader', as the trader outside the company was called, brought out as it always has and will do, a feeling of resentment and keen opposition on the part of the old original company. Old man Davis is a man of strong likes and dislikes but if there is one thing above another that even at the present day and in his condition of advanced age and shattered health can excite him to the topmost pitch it is to fight in trade the Hudson Bay Co. The old man's motto is "war to the death" and the treatment he has received from the old Company has embittered his soul, but he will probably never float again on the waters of the Peace River. His day of active warfare is over. Think of a man paralyzed in the lower part of his body and for the past few months totally blind – so deaf that conversations has to be shouted at him, thinking that he can yet carry on trade. 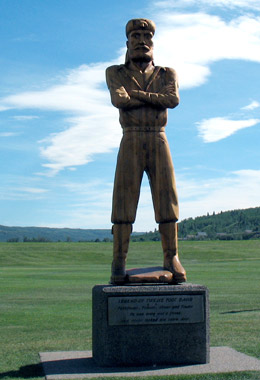 His advances for the past few years have been made by the house of Ross Brothers in Edmonton and he has now come up from Vermilion with the year's result of trade in furs and is taking these in to the Edmonton business house. During the past 30 years this man has had over $300,000 worth of furs pass through his hands and yet when his returns for this year are balanced he will have little if anything to his credit. He has at times been kind to the Catholic Priest at Dunvegan and that large hearted kind old Bishop Grandin of St. Albert has offered him an asylum whenever he will accept it, but that generous offer up to the present has been refused.

When on the Peace he is restless till he can get into Edmonton with his furs and when in Edmonton he is equally restless till he can get once more 'home again' as he calls it floating down the fast flowing river with an outfit of goods to trade once more. He has been paralyzed for several years but total blindness which has now settled upon him must put a period to his business life. Does he think so? Not for a moment. He expects to come back this autumn and carry on trade by deputy but when he leaves the Peace tomorrow he may say good-bye to the river that has seen so many a keen struggle put forth by this mining trader. The keenest enjoyment of his left has been getting ahead of the bete-noir of his life the old and honorable Hudson Bay Co. 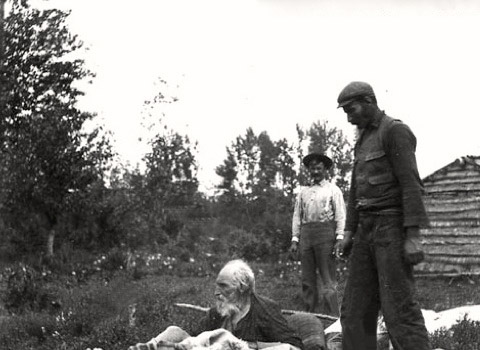 His sobriquet '12 foot' was given him in old British Columbia mining days. A valuable claim had been over-measured in staking it off, the fortunate one had 12 feet too much. Davis found this out and took possession so he came by the name 12 foot Davis and the name will go with him to his grave. So keen was the trading opposition to the H.B. Co. by Davis, Crest and the other 10 that formed the company, that the old Co. paid each of the other 11, $2,500 to quit. Davis alone held out and could never be bought by the old company whose servant he had been for years on the Fraser.

– ditto ditto
(Photo taken by Oliver Edwards) A blind and semi-paralyzed Davis, lying on the ground at Peace River Crossing, waiting to be loaded onto a wagon, with his furs, for transport to Edmontyon, Alberta June 13, 1900
Judy Bowcott & Ken Herlinveaux
Peace River Alberta Canada
Call: 780.332.1086
CONTENT COPYRIGHT: All Rights Reserved ©
All historical photographic images & other images on this site are the property of Wineglass Ranch.
All artwork images are the sole property of Jessica Herlinveaux.