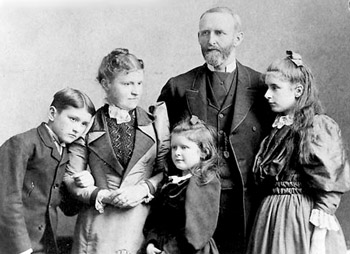 In 1878, Alice Edwards was born in Montreal, Quebec. In 1907 she married Claude Gardiner and together they ran the Wineglass Ranch in southern Alberta. Claude and Alice had two children Claudia and Oliver, and 9 grandchildren.

In 1879, William Muir Edwards was born in Montreal, Quebec. In 1901, William graduated top of his class at McGill University in applied science, and was awarded the British Association Medal for Applied Science. In 1902 he graduated in civil engineering, again receiving the British Association Medal. He played rugby for McGill and in 1902 he received the silver medal from the McGill University Athletic Association by breaking the record in the two-minute mile race. He remained at McGill as lecturer in mathematics and civil engineering, and in 1907 was appointed assistant professor in these subjects.

He married Evelyn Douglas in 1905, and they had three children, Douglas, Muriel and Joyce. In 1908 he was appointed Professor of Science and Mathematics at the University of Alberta.

Muir redesigned the Strathcona's water treatment plant following the 1911 typhoid epidemic. His design prevented other outbreaks. In 1913 he received commissions as Dominion and Alberta Land Surveyor.

During the 1918 influenza epidemic, Pembina Hall, at the University of Alberta was temporarily converted into an emergency hospital and morgue. While caring for the sick and dying William became ill, succumbing to the disease, and died three days before his 39th birthday.

Margaret Claxton Edwards 'Pearl' was born at Indian Head, Saskatchewan in 1885. At twelve she entered the Baptist French boarding school at Grande Ligne forty miles south of Montreal and received a bilingual education. Later she chose nurses' training at Ottawa's General Hospital hoping to work with her father. She married Alex Stewart in 1910. She died in 1913 shortly after giving birth to their first child Alexander.
Judy Bowcott & Ken Herlinveaux
Peace River Alberta Canada
Call: 780.332.1086
CONTENT COPYRIGHT: All Rights Reserved ©
All historical photographic images & other images on this site are the property of Wineglass Ranch.
All artwork images are the sole property of Jessica Herlinveaux.